MELBOURNE AUSTRALIA – March 8, 2020 – MyFavorito has announced MATE as the largest sports sponsor in Australia, as the fan-empowered sponsorship platform rolls out across the country.

MyFavorito is the fan-empowered sponsorship platform that transforms fan love into real money, and it’s changing the game for millions of fans, brands and clubs around the world.

MELBOURNE AUSTRALIA – March 8, 2020 – MyFavorito has announced MATE as the largest sports sponsor in Australia, as the fan-empowered sponsorship platform rolls out across the country.

How did MATE, a telco challenger brand with limited marketing budgets, leverage next generation sports sponsorship to become a key player in the telco market?

MATE recognised MyFavorito is a risk-free opportunity to drive more visits, more sales, customer growth and loyalty. MyFavorito says it’s game on and wants to help MATE with its growth goals for the next three years. 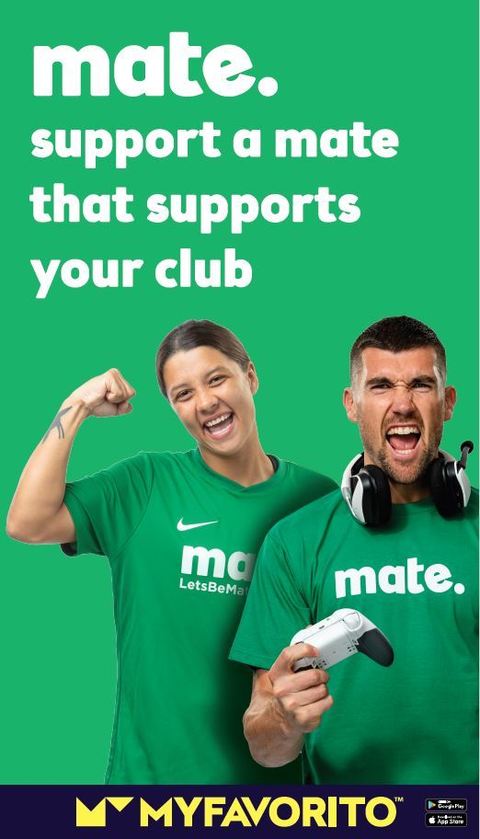 MATE General Manager Mark Fazio says: “We want all Australian sports fans to support a mate that supports your club on MyFavorito. We are empowering fans to make money for the clubs they love by doing what they do every day, which is paying for an internet and mobile service.”

"MATE ran sponsor incentive schemes for football club members previously but MyFavorito delivers commercial innovation at scale. It’s a radically different approach to sponsorship: zero upfront investment and MATE supports all grassroots sports clubs in a fully transactional way. MyFavorito is simple to execute and efficient as the platform manages all financial processes. Plus, we can integrate with existing systems".

MyFavorito is creating the ultimate playing-field for sport. Fans are empowered to make a real difference. Brands build real love and get real return. Clubs access a new infinite revenue source and create their own sustainable future.

"It’s great to have MATE as an early mover – the first brand to roll out nationally and unlock an emotional driver of customer behaviour. We love having Sam Kerr appear in MATE promotions on MyFavorito, what a great ambassador to introduce Australia to fan empowered sponsorship. Fans can now make money for their favourite sports clubs through everyday behaviours - attention and spending”.

“With Grill’d we proved the model for fans, brands and clubs in Australia. Now the MyFavorito roll out is accelerating. We are ready for national scale and have over 30,000 sports clubs listed on the platform – these clubs are in a position to start making money and are available for selection by any fan or customer around Australia. Ultimately, we want to payout $1.6 billion per annum to sports clubs by 31 December 2026. That’s just 10% of what Australian businesses paid for Facebook and Google ads in 2019”.

MyFavorito is the fan-empowered sponsorship platform that transforms fan love into real money. We are here to create the ultimate playing field for sport with a radically different approach to sponsorship. Fans decide: empowered to make a real difference. Brands activate: build real love and get real returns. Clubs win: access a new infinite revenue source and create their own sustainable future.

More than just helping sports clubs make more money, MyFavorito is changing the game for millions of fans, brands and sports clubs around the world. Flipping the traditional sponsorship model on its head, we’re creating a world where everyone wins.

For more information, visit www.myfavorito.com and connect with Mark Hinshelwood via [email protected]